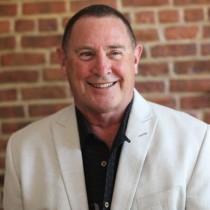 Lama Marut (a.k.a. Brian K. Smith) is extensively trained in the spiritual traditions of India and Tibetan Buddhism. He holds a Ph.D. in Comparative Religion and taught for over two decades in the academic world, first at Columbia University and later at the University of California, where he retired as Professor Emeritus in 2004.

He lived as a Buddhist monk for eight years and has served for the past 15 years as a spiritual teacher to students around the world. Lama Marut is currently the Spiritual Director of eight “Middle Way Centers” located in North America, Australia, and Singapore.

In addition to several scholarly studies and translations based on Sanskrit materials, he is the author of the popular and award-winning book, A Spiritual Renegade’s Guide to the Good Life. His frequently posted audio and video podcasts reach hundreds of thousands of people around the globe.

With his unique mixture of erudition and earthiness, intensity and humor, conviction and openness, Lama Marut’s message is easily accessible and potentially life changing.

I believe that the question of spiritual lineage has become exceedingly complicated in the postmodern world. Things are no longer like they once were in closed societies like traditional Tibet and India where people were much more parochial, provincial, and unaware of the whole range of religious and cultural alternatives. Our world is a much bigger and diverse place.

In any case, it seems questionable that there ever were such things as “pure and unbroken lineages” in such traditional societies. Any such claim seems to have functioned as a convenient fiction and polemical stratagem designed to assert authority, and was rarely if ever a factual account of the historical and genealogical record.

We live in a global community of instantaneous communication; we reside in nation-states that are increasingly multicultural and religiously diverse. My own religious sensibility has been shaped by a variety of influences, and I suspect that is the case for most of us living in such cosmopolitan settings. It seems far more honest to just admit this and lay aside the conceit of any sort of “unbroken” or “pure” lineage.

I was brought up a Christian and to this day have an abiding interest in that tradition. My parents, who provided a Christian context to our home life; the minister who baptized me; Sunday school teachers who educated me about the tradition; great preachers (like William Sloane Coffin) whom I had the privilege of hearing many times; and current spiritual friends and advisors like the Reverends Brian Baker in Sacramento and Anne Deneen in Cape Ann, Massachusetts – surely all of these religiously foundational and influential figures have to be included in my own lineage.

For over thirty years of my life I was employed in the academic study of comparative religion with an emphasis on Hinduism. My understanding of religion was shaped by my advisor and other professors from graduate school (Mircea Eliade, Wendy Doniger, Jonathan Z. Smith, and others) as well as by my colleagues once I entered the professoriate. My personal religious sensibilities have been profoundly enhanced by my deep study of Sanskrit (and “Hindu”) classics like the Bhagavad Gita, the Upanishads, the Yoga Sutra, the Ashtavakra Gita, the Hatha Yoga Pradipika, and the Vijnana Bhairava Tantra – texts I have also had the opportunity to teach to students around the world over the past decade or so. In addition, I have had a very rewarding personal connection to the Satyananda Yoga community in Australia and especially to my friend and spiritual sister Swami Atmamuktananda, who runs the Rocklyn, Victoria, center where I’ve led several retreats.

In 1998, I began an intensive study of Buddhism under the guidance of Geshe Michael Roach and eventually completed a 36-course curriculum in the open and esoteric texts of the Gelugpa lineage of Tibetan Buddhism. Lama Christie McNally taught the esoteric portion of this curriculum side-by-side with Geshe Michael, and I am very grateful to both of them for what I regard as a very thorough training in this form of Buddhism. I also have had many teachings and initiations from His Holiness the Dalai Lama and other high lamas of the Gelugpa tradition: Geshe Lobsang Tharchin, Kyabje Lati Rinpoche, and Geshe Tsultrim Gyeltsen.

My personal lineage also includes connections to Tibetan Buddhists outside of the Gelugpas. I have been fortunate enough to have had teachings and an initiation from one of the greatest living masters of the Dzogchen tradition, Chogyal Namkhai Norbu, and have been extremely influenced by my study of the written, audio, and video teachings of the great Kagyu master, Chogyam Trungpa Rinpoche.

And then there are the modern Western Buddhist teachers from both inside and outside the Tibetan Buddhist tradition whose books and audio teachings have helped me so much: Jack Kornfield, Lama Surya Das, Sharon Salzberg, Joseph Goldstein, Noah Levine, and others.

I guess I could mention other spiritual influences (the Sufi poetry of Rumi, the eclectic and often iconoclastic perspective of Alan Watts, even the philosophy of Friedrich Nietzsche), but perhaps this is enough to make the point.

I am grateful to all my teachers and all the traditions from which they spring, but I am not defined or confined by any one. If there is “authenticity” to my practice and teachings, it derives not from any one source but rather because it resonates with the truth. If the teaching, practice, or belief leads one to be kinder, more compassionate, wiser, and happier, it is authentic, no matter where it came from. And if it doesn’t, it isn’t – even if the teaching, practice, or belief is regarded by others as “orthodox” or “traditional.”

I believe the true purpose of any spiritual practice is not to separate the practitioner from others, let alone to give one the illusion that he or she is somehow superior to others. The purpose of a spiritual life is not to become better THAN others, but to learn how to be better FOR others.

To that end, while we should honor our mentors and teachers for all they have given us, I am increasingly of the opinion that perhaps it’s best to avoid labels (“Gelugpa,” “Buddhist,” “Christian,” “secular humanist,” or whatever) that set us apart from others.

We are all equally human, we are all equally suffering, and we all equally have the potential to realize true happiness. Let us concentrate on the things that unite us rather than obsessing about identifications and designations that prop up our egos and divide us from each other.

Here’s what His Holiness the Dalai Lama says in his Introduction to Joseph Goldstein’s book One Dharma: The Emerging Western Buddhism:

“Joseph Goldstein. . . is an example of a new kind of Buddhist that we find in the West these days. Rather than holding tightly to a single tradition, he has studied with an array of teachers, integrating aspects of several Buddhist lineages into his practice. There are historical precedents for such an approach. Buddhism has often been reinvigorated when a new synthesis has been created from existing traditions.”