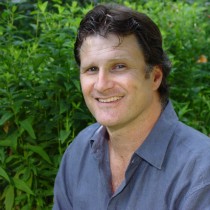 “As far back as grade school, I remember picking up a book on religions of the world, and the section on Buddhism held a particular fascination for me. In high school, I was given the reading assignment of Herman Hesse’s Siddhartha and again it sparked an interest. The thread continued to college, (the ancient times known as the late 1970s) when I trained in Transcendental Meditation. Post college, while starting a career in TV and Film, I danced about with these ideas informally, but it was after working on the documentary film, In Search of Kundun with Martin Scorsese, and meeting the Tibetan Community in exile in Los Angeles, that again something roused in me and I began to seek a teacher in the tradition of Tibetan Buddhism. I attended teachings with Geshe Tsultrim Gyeltsen in Long Beach and also at that time was introduced to Lama Marut, then Brian Smith, who at the time was teaching ACI Courses. Soon after attending my first class, ‘I was hooked’ and began an association with Lama Marut as my principle teacher, subsequently took the refuge vows as a Buddhist practitioner, and sought to make this my life’s practice.”

In addition to his studies with Lama Marut, Rick has also studied in with Geshe Michael Roach and Lama Christie McNally. He has been privileged to attend teachings given by His Holiness the 14th Dalai Lama in both the U.S. and India. Rick and his wife, Lindsay Crouse, created, “The Summer Retreat,” an annual 6-day retreat conducted in Massachusets since 2004. Rick is a founding member of Middle Way LA, a Senior Teacher,and now serves as an Advisory Board member. In addition to Middle Way LA, he and Lindsay share the role of Resident Teacher/Spiritual Advisor at the Wisdom’s Heart Center in Cape Ann, Massachusetts where they spend part of the year. Rick works in the TV and Film industry as an editor and director including a nine-year run on the hit-series “Scrubs”.