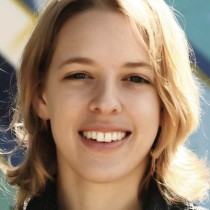 Claire began her Buddhist studies in New York City in the New Kadampa Tradition, while also practicing Yoga at the Sivananda Yoga Center. Upon moving to Los Angeles in 2007, she started studying with Lauren Benjamin and Lama Marut and under their guidance went on to complete the 36-course program of Tibetan Buddhist studies. Claire attended the Yoga Studies Institute’s 200-hour Yoga philosophy training in 2010, studying the great books of Yoga with Lama Marut. She was a founding teacher of Middle Way LA Yoga program, where she apprenticed under Sarah Canfield, and has since completed the “Awakened Heart, Embodied Mind” Yoga Teacher Training offered by Hala Khouri and Julian Walker at Exhale, Los Angeles.

Claire has been a practicing massage therapist for more than 10 years and enjoys teaching workshops that mix massage instruction with meditation and dharma philosophy. Having studied classical singing at Oberlin Conservatory, Claire now shares her love of music through singing kirtan at retreats and with the Dub Kirtan All-Stars band, started with Darin McFadyen, a.k.a DJ FreQ Nasty. Currently, she teaches yoga asana and meditation, and presents workshops (including the “Yoga of Bass” co-taught with Darin) at music and yoga festivals, spiritual retreats, and yoga and Buddhist centers in the U.S. and internationally.